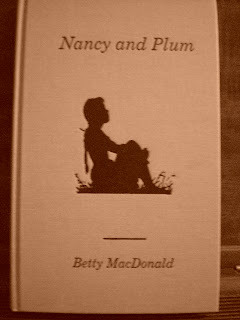 I was so excited to have a book arrive in the mail today.

It's called Nancy and Plum, it's a children's book, and it was written by my favorite author Betty MacDonald.
Now you have to understand that Betty was a best selling author back in the 1940's and yet today her work still holds up. Her first book The Egg and I sold over one million copies in less than a year and besides being phenomenal it was even more shocking because the author was a woman. Her humor and ability to describe people and situations will never (in my opinion) be surpassed by any one else.
Today there are Betty MacDonald fan clubs on the Internet and I will scan them now and again to see if there is some information on Betty that I haven't already learned. She only wrote a few books yet each one was a gem and I selfishly wish she'd lived longer (she died in 1959 at the age of 49) because I can't imagine what else she would have come up with.
How can someone write about their year long stint in a Tuberculosis Sanatorium and cause the reader to snort with laughter (The Plague and I) ?
Or describe, with great humor, living with her mother and sisters during the depression, as a divorced mother of two? (Anybody Can Do Anything). One of my favorite passages in this book is her description of a blind date with a German man named Hans who left his fingerprints all over her as well as every other woman in the room. My Hans denies ever having had any family living in the United States back then, but I wonder!
Onions in the Stew is about living on Vashon Island in Washington as a new wife, and the mother of two teenage girls (who bleached their hair with peroxide, and had plans to drop out of school and tour with the USO!) during World War II and the days of food rationing.
And of course the book that started it all, The Egg and I, an unbelievably funny tale of life on a remote chicken farm in the mountains sans running water or electricity. And this book introduced the hilarious Ma and Pa Kettle to the world. Apparently some people up in the mountains didn't find it to be so funny because Betty was (unsuccessfully) sued by a family who said they were the Kettle family portrayed in the book and they were thoroughly insulted.
To this day they still are.
Betty also wrote the Mrs. Piggle-Wiggle books and while over the years I'd managed via garage sales and E-Bay to find most of her works, Nancy and Plum was just a little too expensive for me. But I just bought it for $17.00 through Powells Books on the Internet and now I can rest easy.
As I mentioned before, Betty died at 49 but she had six grandchildren by then and what better fodder for books than grandchildren, inlaws, etc...
Anyone who could make people laugh about TB really could have done anything!
Posted by laura at 10:09 PM

I've never heard of Betty MacDonald, but your descriptions of her have got me itching to read one of her books. This is exactly the sort of stuff I like to read: a quirky and upbeat memoir of sorts. It's the chicken farm one I most want to get my hands on. I wonder if any of her books are at my daughter's library?

Mary, Betty will become your new best friend! I mean it. If they don't have the book at your daughter's library, do they have inter-library loan? If not, The Egg and I (the first book) is available and affordable on E-Bay almost all the time and if not there, go to Abe Books, Powells.com, or even Amazon. You have to get it! As an author you will be so impressed with her style.

I made some mistakes.

I'd love to hear from you.
Perhaps you can corrent my former message.

Anyway - Betty and Alison are both very, very funny.

Did you enjoy Nancy and Plum?
It's one of my favourites.