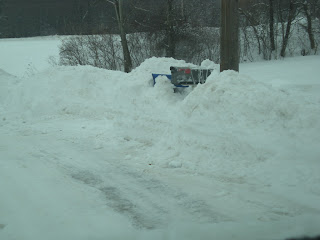 I'm certainly no stranger to snow. For goodness sake I grew up in this Snowbelt and we often refer to it as living in the Tundra. But the snow that we've received this month is kicking my butt! The post office would not deliver my mail this week because my mailbox was unreachable. I've been shoveling since Monday and today during yet another marathon session I felt like I might succeed when I heard something that sent chills up my spine. It started out as a muted rumbling and then got louder and louder. Oh God no!! I almost wept. It was THE SNOWPLOW (or that thing of which nightmares are made) and as it worked it's way up my road, it churned up mountains of icy snow that it quickly deposited at the ends of nicely shoveled driveways, and in front of finally cleared mailboxes.


"You will not plow me in dammit!" I swore to myself, and clutching my dented, worn out shovel, I stood in front of my mailbox and dared him to even come close.


Mr. Plowman and I had a little staredown until he wisely (probably married and has received this same look from his wife at one time or another) veered into the middle of the road steering clear of me until he was way past me and then went on his merry way.


"Bastard" I muttered and continued to shovel.


One of the reasons I'm so pissed is because my mailbox was beheaded by a plow in December and had been hanging on by a thread even after Hans' and my attempt to keep it in place with huge tie wraps (or zip ties or whatever you want to call them) until it can be permanently fixed this spring.


Our feeble efforts lasted until today when my mailbox finally gave up the ghost and toppled into the snow!


An hour later along with two wire coat hangers, wire cutters, string, screw drivers, a hell of a lot of swearing, and completely frozen toes and fingers, I think I secured it (until the next snowplow that is!).

Then another plow came along and I was ready to give him the finger even though he was on the other side of the street. He rolled down his window and told me to get in my driveway.


Since he had the advantage of driving a huge weapon and I only had my trusty shovel, I obeyed.


Then he carefully plowed out the end of my driveway making two very close passes past my mailbox (very important here) without hitting it, and saving my poor back from breaking any further.

This seriously cut into my packing and moving time and after standing on a heating pad to thaw my feet I was ready to go again.

Oh yeah, I had to use a heating pad since I couldn't run hot water in my bathtub. Why? Because I just noticed that my tub has a leak and is leaving a lovely stain on my ceiling tiles in my family room downstairs!!!!!

I'm almost delirious with all the fun I'm having! 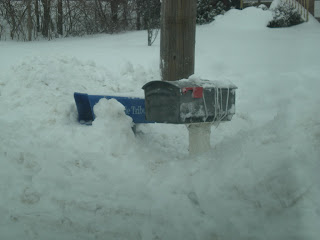 This is my mailbox after I tied it back on with string.

It was too wet for Duct tape! 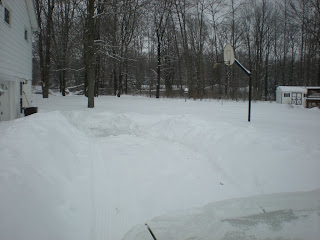 It's difficult to see, but this is my driveway as seen from the road (and from inside the vehicle). 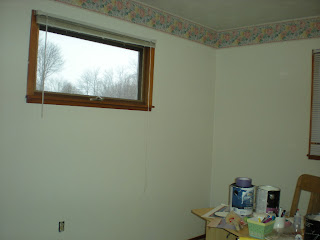 This is the last room that finally got painted. See the border up by the ceiling? I had to tape both the top and bottom because in addition to painting the walls I also painted the ceiling. I don't have a ladder so I used a chair and being all of 5 feet tall I had to stand on my toes to get the tape on the top part!
Not fun.
And I had this same situation in one other bedroom too. 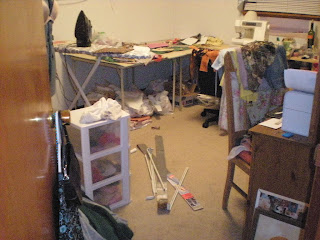 And here again is the before picture. All of this stuff and more got packed up and brought to the Big City tonight. 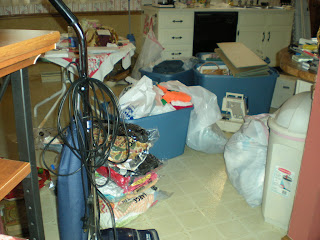 Here is most of it packed and sitting in my kitchen. It was then carried down a flight of steps, loaded into the SUV, driven to the Big City, and hauled UP even more stairs to Hans' apartment!

And after today it may be the last.
Posted by laura at 6:04 PM