We managed to get to Washington DC just in time for a huge lightning storm that ripped through the channel where we were anchored (while Wilbur was crated on board with hatches wide open and we were on shore!), and then left in time to miss the earthquake.

The heat is still oppressive and I really feel at times like I might start having anxiety attacks if it doesn't let up. It's that bad.
We had guests over the weekend which included Hans' hockey buddy who brought along his son and his son's friend. I hope they had fun and can forget the excess and crazy attention that Wilbur heaped on them. I have got to get that dog to obedience school as soon as we get back to the Big City this fall.
Of course the water pump decided to throw it's belt the night before our guests were to arrive. Hans had to remove it from the engine/sauna room and bring it above for a look see. For some reason part of the cog that rotates with the belt had worked its way out of alignment. He loosened the set screw, pushed it back into place, put everything back together, and mounted it back into the engine/sauna room.
It didn't work!
Luckily for the water pump (who had no idea that a hammer wielded by a very hot, very big man was going to be the next 'fix') Hans figured out that all he had to do was flip the membrane (still sweaty work) and then whooooooopie! Not only does the water pump now work, it no longer leaks!!
Tomorrow we're heading back to Solomons Island where Wilbur will have a follow up visit to the vet for his yeast infection and our Snotty Cat is due for a very expensive oil change.
Temperatures are going to be in the upper 90's.
I can barely wait!!! 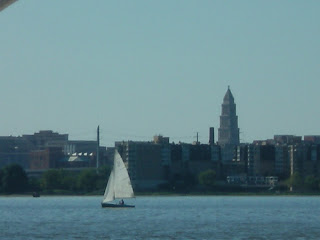 A view of DC from the Washington Channel. 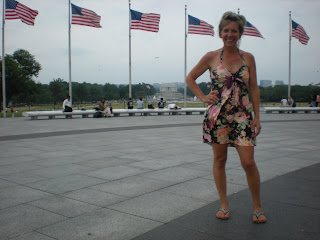 Here I am at the Washington Monument. The Reflecting Pool (remember seeing it in the protest scene from Forest Gump?) is way behind me. This is one of my Simplicity sundresses and I was still boiling hot!
Posted by laura at 2:34 PM 6 comments: 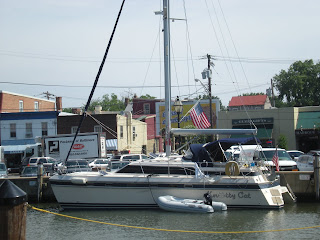 I've never been the brightest bulb in the box but I did discover two very important things a while ago. These things being, I now understand why boats are referred to as 'She, and that I have a big mouth.
My fiance Hans has been sailing all his life and knows all about boats. Unfortunately for him he hooked up with a complete novice and that would be me. After selling his last boat (a forty-two foot Passport) back in 2005 and swearing he would never buy another one, a couple of years ago we went and bought a Bob Johnson thirty-five foot Catamaran.
Along with two other friends we spent a full week sailing her from Boston down to Maryland and our little cat performed admirably. For a spell we had her sailing along at 9 knots and with sails aloft she absolutely purred as the crew shouted with delight. Hans was also able to sail her pretty close into the wind and we praised our girl non stop. You see, the research we'd done on this boat told us that we'd be lucky to do seven knots and that sailing close to the wind just wasn't going to happen.
We had a lot of rainy weather and one memorable night had us forty miles out at sea with 30 knot winds and 5 foot seas. I'm sure for a hardened sailor this would be nothing, but for someone who gets car sick five minutes into a trip it's a big deal and I was one with my bucket all night long! A couple of our stormy anchorages made for little sleep as we listened to the wind howl like the devil all night long but our anchor held firmly each time. We were all relieved when only one day over our estimated arrival time we sailed into our harbor and set foot on land. Hans felt that we'd really put this boat through the paces and he was very happy with her performance.
So let's fast forward to much nicer weather and a pleasant little sail. This time it was only me and Hans and we decided to spend a long weekend aboard our girl. After a typical day of admiring all the new baby ospreys who eagerly poke their beaks over their nests as you sail by, avoiding crab lines and fast boats, we arrived at St. Michaels. We enjoyed clear skies and hot temperatures, shopped in quaint little stores, and cooked steaks on our grill.
Now here's where it gets interesting. We had spent two nights at anchor and were preparing for a third when I noticed another boat coming in. I couldn't help but notice her as she sashayed in saying "Ooh la la, look at me! I am a beautiful French Catamaran and you will make room for me!" And that's when I opened my big mouth. I pointed her out to Hans all the while gushing over her beauty. Hans too admired her size, pretty round curves and youth, and I believe that's when our sturdy American girl began plotting her revenge. As I mentioned earlier, we've suffered through some very dicey conditions and our anchor has held firmly so why would we worry now.
It was three AM when I heard a voice quietly calling out to us from somewhere outside. Hans was up like a shot and I heard the voice tell him that we were drifting. Drifting! Hans moved the boat, re-anchored, and puzzled over how our anchor could have let loose. Then he told me it was the owner of French Catamaran who'd called out to us. When morning rolled around and we were a little more clear headed I expressed my concerns to Hans. We had to have hit that other boat because how would they have known we were drifting? Well, that's exactly what happened. The owner (who was the nicest man in the world) motored over in his dinghy and told us how he had been awakened by a big thump and came up top to find that our cat had used her swim ladder brackets to smack their little French girl right across the nose, leaving two holes right above her water line! He fended her off and as she smugly drifted away that's when he called out to us.
We've been careful ever since then to praise our cat and exclaim over her beauty every time we set foot on board. But after this very expensive trip (where as soon as one thing is fixed two other things break) we got out the big guns and made our threat. High maintenence is one thing (as long as you get something in return) but we've had it with this whole 'everything is about me and now I want botox plus a facelift' attitude and we can file for divorce from you anytime we want. It's called being put up for sale Miss Snotty Cat, and just see if your next owner gives you the spa treatments you've received from us!
Posted by laura at 1:00 PM 8 comments: