What are the chances?

Yesterday we motored past the Figure Eight Bridge in North Carolina (and we were lucky enough to arrive about 3 minutes before its opening). Only one other boat came through with us and like we always do, we looked it over. We like to see what kind of boat it is, what kind of rigging or equipment they have, where its from, and what its name is.

Now wait a minute, I thought. How many Island Packets from Michigan are going to have that name.

I'm pretty sure Hans thought I was crazy when I told him I thought I might know who they were.

I got on the radio, requested they go to channel 68 and asked if Marji was on board.


When I heard a woman start laughing, I knew I had it right!


Yes folks, Marji from Fiber Arts Afloat (and SV Far Niente) passed us in the Intracoastal Waterway!! I had checked her sailing blog earlier but she hadn't posted on it recently so I had no idea she was anywhere near us.


And even so, what are the chances that we'd actually pass like ships in the night?

I've been a very bad blogger, but I sort of have an excuse! 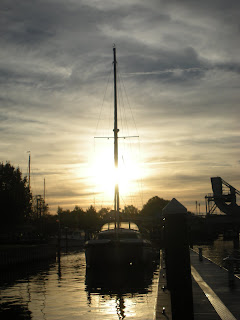 While this may seem like an idyllic picture of our boat, don't let it fool you!
We are now into day ten of our trip from Kent Narrows, Maryland to Jacksonville, Florida via the Intracoastal.
So far we've experienced three feet of water in a locker, an overnight sail that involved 30+ knot winds with 3-5 feet of swelling waves (at 3 AM one of them playfully washed over the stern, Hans head, and then crashed around the cockpit), a puking crew (that would be me!), and freighters that seemed to appear out of nowhere.
Our GPS, also known as 'Fritz', decided to take advantage of our agony and took his union break. Fritz now does as he pleases and just dares us to turn him into the 'Big Boss'.
Big Boss or not, Fritz will be replaced when we reach Charleston, SC. 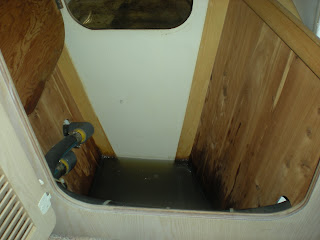 There is three feet of water in that locker.
We finally figured out that while our girl was on the hard this summer, the drain from a locker at the bow of our boat was leaking. For two months rain water accumulated here and it was stinky and gross!
We ended up replacing the hoses ourselves and lost a full day of sail. 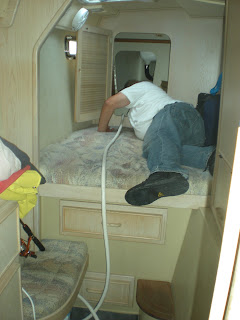 Hans McGyver rigged up a syphon to the bilge, therefore we didn't need to buy a pump! 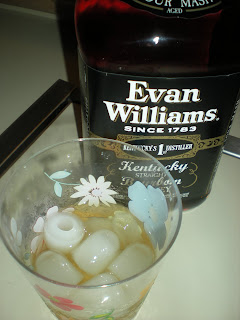 Along with the portable ice maker that we bought, good old Evan Williams tried to make me forget my troubles. 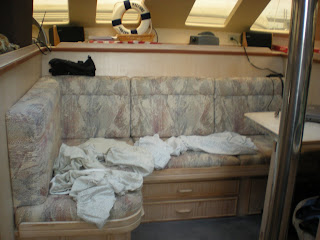 This is our salon area. This summer Wilbur wreaked havoc on the cushions so I decided to made some covers.
I used some old king size sheets and while they worked, I'll use better fabric if I ever do this again. 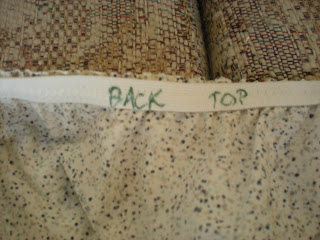 The cushions vary in size so I used a Sharpie and wrote the designation for each piece on its elastic. 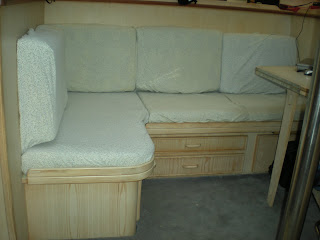 Hopefully they'll improve the life of my cushions for awhile.
We are currently in North Carolina and expect to be in the Cape Fear River tomorrow.
I have to say this has certainly been a very interesting trip and I don't expect that it will change.

Hurry Up and Wait

We left Swansboro this morning and even though it's a beautiful sunny day, we're not going to get very far.  That's because we're back to dealing with bridges and a lack of anywhere to anchor or dock once nightfall approaches.  We'd love to get into Wrightsville Beach today and maybe we would have if we'd have gotten out of our slip before 7 AM.  But it was dark and it's too easy to keep on sleeping...

By the way, if you ever want to be thoroughly entertained;  find your nearest drawbridge, make some popcorn,  pull up a chair, and be prepared to enjoy yourself.

Why the big rush to get to a drawbridge that you know won't open for another 15 minutes to half hour, or even an hour (we once missed an hourly bridge by 5 minutes)?  Is it a need to be the first in line? Is there a prize waiting for the 'winner'?  All I know is that after being passed by lots of boats (the Knotty Cat likes to take her time or maybe all those cases of beer she's hauling really do weigh her down) we all eventually end up in one big snarled mess in front of a bridge. Today was a classic.  Two small sailboats who were obviously traveling together and refused to be separated were sucked right up to a swing bridge.  Some bigger motor boats also crowded in and even though we hung back the next thing we knew, the bigger boats were revving up in reverse and the little sail boats were bobbing around like ninnies and one nearly ran into the bridge support. The bridge operator kept trying to hail the out of control sailboat and tell it to please start through as soon as the bridge swung open (in the opposite direction thank God) but they never answered. Then the chatter started, "Doesn't he have a radio?",  "I know he has a radio." "Why is he sitting there? Does he want us to go first?"

I got out my trusty binoculars and saw that the captain and his 'woman' were standing in the cockpit and apparently weren't taking calls.  Just when it seemed like the big boats were going to charge through, the two little sailboats got into the act and like two little old jaywalking women, crippled their way through the opening.

Hans calls this Dancing with the Stars.

As of 3:00 we are now waiting at another bridge that opens on the hour and the sad thing is, we could have been here at 2:00. But clear back at Swansboro we had 2-3 knot winds working against us and were only doing 4 knots while motoring at 6.  When we realized we wouldn't make the bridge we dropped to one engine and slowed down. Of course the current changed completely and started pushing us like crazy and when we were two miles away from it, the bridge opened.  We ended up waiting 45 minutes.

In the end it doesn't really matter because were going to dock at Harbor Village Marina as there are no more docks until Wrightsville, and I don't see any good anchorage areas.  Wrightsville is over 20 miles away with yet one more hourly bridge (they all stop opening at 7 PM) and with the current acting like a woman who can't make up her mind I don't want to get stuck in the middle.

In addition to all that, our GPS is still giving us fits and takes a nap (we call it a union break) every day. Fritz (as we've named him) usually wakes up just as we're anchoring or docking and acts like nothing is wrong what so ever.

Won't Fritz be surprised to find that his replacement is awaiting us in Charleston, SC?

No one sleeps on watch!