The move is on. So what could go wrong?

As I mentioned earlier, Hans got a job offer in Florida and we've been trying very hard to settle our affairs here up north before we jump into our two vehicles and head south in order to move our boat from the east coast of Florida to the west. God, it sounds so simple.

Hans has done a very good job of tying up the loose ends of our lives here, ie; the landlord, utilities, and making reservations for us at pet friendly hotels along the way, while I've been weeding through too much junk (who really uses the lotions pilfered from hotel rooms and why do we really need eleven chapstiks?), wearing a rut in the road to the Good Will, becoming great friends with a very sweet liquor store employee (who calls out, "Hey girl, how ya doing?" every time I slink in and ask for more boxes and only occasionally some alcohol), puzzling over why Hans still has a pair of black jeans with a waist band measurement he hasn't seen since the last century, and all the while sweating like a whore in church.

Damn, this has been a hot summer.

Things were moving along quite swimmingly until Hans came home Thursday morning after his very last hockey game here in our Big City, sporting a knee cap twice its normal size thanks to a run in with the boards. Keep in mind that Hans has a huge tolerance for pain and never complains. But when I asked if he needed an ibuprofen and he agreed that it wouldn't be a bad idea, my heart sunk as I knew I was now the only soldier remaining on the field.

He spent the day on the futon with an ice pack on his knee and a warm pitty at his side. 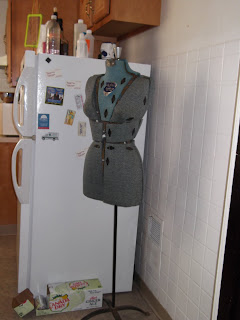 Sally Stitch didn't make the cut and was delivered to the Good Will. She had many chances to redeem herself but never quite followed through.

Now someone else will have to put up with her antics. 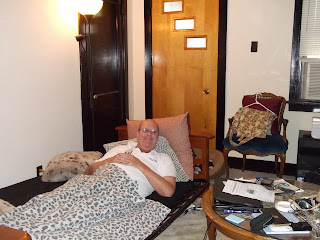 Here's Hans lying on the futon with his knee injury and a smile on his face.

BTW, that futon bought the farm last weekend during Baby Brother's stay and refuses to sit upright. It will now find itself on the street with our garbage next Tuesday morning.

One less thing to store. 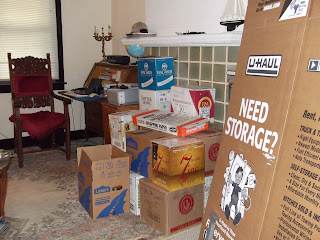 Just a small amount of junk that's going into storage. 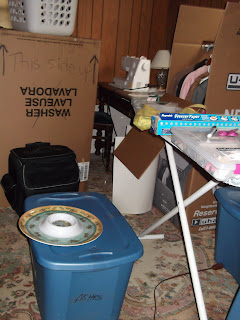 The ironing board also ended up at the Good Will. I'm not storing a ten dollar item.

The day after Hans injured his knee, I spent the day sorting, sweating, and packing. Then Wilbur woke me up at one AM with the pukes. He made it as far as the kitchen before he lost it but hey... it's only linoleum. When he woke me up at three AM with more puking I got him as far as the deck. After that he expressed an interest in some alone time and slept on the futon. However the next morning I found he'd had a serious tummy issue and tried to hide it in the corner of the living room (on the landlord's off white berber carpeting no less). It was diarrhea, and bloody diarrhea at that.

That's when my world stopped.

So in addition to my very expensive 'cut and color' at the salon, Wilbur got rushed to the vet clinic. Normally he loves the attention he gets at the vet's but he really wasn't prepared for things getting stuck up his butt, deep into his ears, and sharp sticks being poked into his flesh. After his second injection, indignation practically dripped off of him and with wild eyes, he forlornly oowoooed and ooowoooed his way around the examination room. When we left, with four prescriptions, he told his former favorite people that he just might not come back.

He then slept the whole way home and hasn't pooped since.

This was two days ago and while I normally like the aroma of chicken and rice, I don't care for it in the recycled form of dog farts. 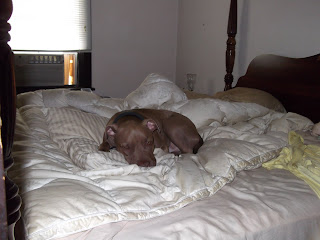 A very sick pitty and I pray he poops before the day is out!

Today is Sunday, we finish packing on Monday, the movers show up on Tuesday, and we're on our way Wednesday.

I only hope Wilbur doesn't have an oops moment at any of the hotels we have reserved!