A couple of purses and a beast.

I'm in the Big City for the weekend so I won't be getting any sewing done but I was going through some old pictures and found these. 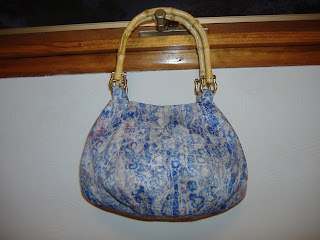 This was the first purse I made from Nicole Mallalieu's pattern collection. It's the Belle Bag and I bought some home dec fabric that was on sale for about $2.00 a yard. I was very happy with the results and I've ended up making many more. I didn't use any batting to give it body so it's a little 'limp', but my next one will definitely have more body. 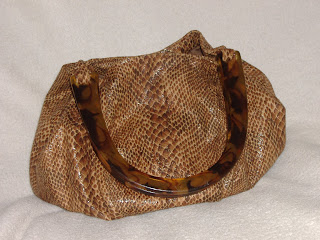 This was my second attempt and once again I didn't add batting. I still like it but can't help but think that it would look a lot better with some firmness to it. 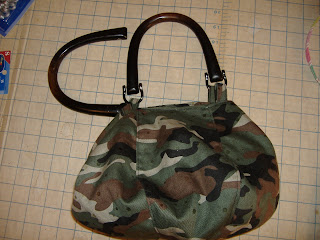 Here's what happens when you buy cheap handles at JoAnn's. I was walking along and all of a sudden the pin that holds the ring to the handle just fell out. I can probably rig something up but I haven't felt like it yet.

News Flash!
Well, it finally happened.
The Beast loves to go out on my back deck and she lets me know this (in a very imperialistic manner) each and every day.
I've had a few close calls however, like going back to work and forgetting that I've let her out which results in my jumping up from my desk and rushing home to let her back in (I live across the street from where I work).
You see, The Beast is an indoor cat. She's been declawed and shouldn't be out at all but I've barricaded the deck so that she can't escape. This is a big joke though because she escapes nearly each time but luckily she doesn't go far, usually she just goes around to the front of the house and asks to be let in the front door.
Well, she demanded to be let out at lunchtime on Thursday because it was such a beautiful day, and of course I relented. Later on I went straight to work at the inn from my daytime job and didn't get home until later that night.
Friday morning I was getting ready for work and the TV (which I have on full blast so I can hear it it the bathroom) went silent with some sort of network problem. So while the TV was off I kept hearing a really strange and irritating rusty sound that I finally narrowed down to as coming from the direction of my deck.
I opened the door and nearly choked when a very frosty Beast rolled into the kitchen.
I'd left that poor thing out all day and night long!
She couldn't get to her food dish fast enough.
I still wonder how long she would have been stuck out there if the TV hadn't gone out.
Needless to say I think her deck days are over for awhile. 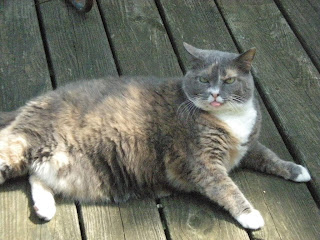 The Beast's current opinion of me.

Hi Laura - I clicked on the photo of the blue bag and really like that fabric - the detail showed up in the large photo and it is so pretty, isn't it?

Hi Laura,
My three cats are all indoor cats but one of them is an escape artist and managed to get out twice this week. He's too fast for the wasband. Fortunately there is a dog next door now who starts barking when he sees Yoda and Yoda comes tearing back into the safety of the house.

Only once was he gone for a whole night. It was cold too but he survived.

The bags are beautiful I wish I was so talented.

Aw, poor Beastie! That picture says 1,000 words! You are in the dog house, Laura.