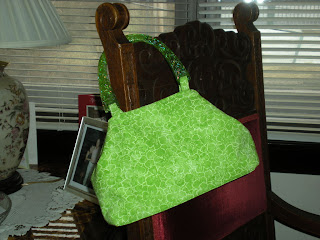 St. Patrick's Day is a big deal here in the Big City and we have friends who observe this holiday with wild abandon, starting with the annual St. Patrick's Day Parade.
We've only been to two of these parades and I've always felt a little disloyal and totally underdressed as everyone shows up with green hair, green clothes, green food, and in some cases green babies. I nearly fainted the first time I saw this practice and always hope they've used harmless makeup on their little ones. 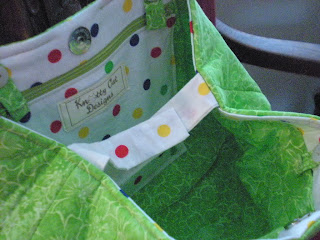 So this year I decided to jump on that green bandwagon and Friday night found me frantically cutting and sewing a green purse.
Saturday morning Hans and I set out, and with my green t-shirt, green beads, and green purse, I felt like a true Big City native.

Our friends always stake out their place on an upper floor of a parking garage (along with hundreds of other celebrators!) and we went in search of them. 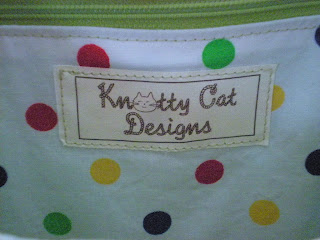 But we couldn't find them.

Up and down five levels of the garage we trekked all the while stepping over big puddles and streams of what I've come to realize over the past couple of years are not water, but urine. Yes urine, because there are no porta potties to be found here and since some of the revelers have been here since 6 AM, they have to go somewhere!
Every now and then we thought we recognized someone and we would carefully step past portable bars and banquet tables loaded with food and drink so that we could take a closer look. 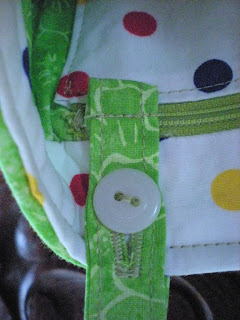 But we had no luck and then finally Hans started calling them on his cell phone (Let me state for the record that I'd told Hans to check with them the night before to verify exactly where they'd be).

Well we found out where they were all right.

Not at the parade, that's where.
For the first time in years most of them had to work and couldn't attend the parade. So we wandered around dodging drunks, and puddles of pee for nothing because we literally saw almost nothing of the parade as it was just ending as we finally realized we were on our own.

A day late and a dollar short seems to be the story of my life.

But I did end up with a lovely green purse (based on Nicolle Mallallieu's Day Bag).
I found the handles on sale at JoAnn's and now I wished I'd picked up the pink and blue ones too.

And as I've mentioned in the past, I'm very cheap so I went one better with this bag. I decided to make the handles detachable so I put button holes in each strip that holds the handle to the bag and then I put buttons inside on the facing. You could put cute buttons on the outside of the bag instead but I wasn't thrilled with my button holes and just went the safe route. Now If I want to use these handles on another bag, I can.

I believe I'll be doing a lot more of that. 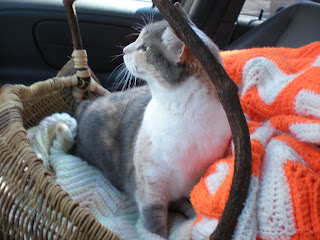 Here's a pretty kitty on her ride to the Big City. I opted to put her in a basket as she seems to have huge issues with being put in a box.
She did surprisingly well and I only had a problem with her once.
I had to answer my cell phone (I know I shouldn't have but I did) and Chlorox took immediate advantage. I will have to phone my handyman back and apologize to him for cutting our conversation short, as my cat oozed out of her basket and was quickly approaching me with a look on her face that suggested she had a strong desire to drive my car.

Great to see you're continuing with the variations on the theme of Day Bag. Love it. Love your cat, too...

Thnaks for the sidebar link!