Remember Mr. Rogers' Neighborhood? As a child I just loved that show, I really did. And even though Mr. Rogers actually lived in My Big City I don't think he lived in the same neighborhood as me, I really don't. 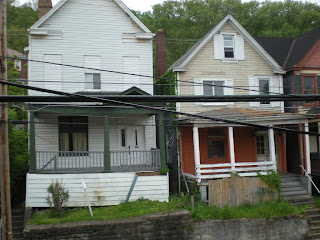 (This is directly across the street from us.)

Hang in here and you'll see where I'm going with this.

Last night Hans and I had Alaskan King Crab Legs for dinner.

And no it didn't break our bank.

Get this, I bought them for $5.99 a pound at our grocery store. And since they were so cheap I figured there must be something wrong with them so I only bought one package.

Needless to say, I'm going back today and I hope no one else in the neighborhood has figured out what a great bargain this is and that some are still remaining because they were fantastic!

And since Hans and I don't have a stove, I cooked them in the microwave. Just wrap them in wet paper towels and nuke on high for about 4 minutes. That's it. Of course I dipped mine in melted butter and then since I absolutely ruined any good that my afternoon run may have had, I figured what the hell, and ate a dish of full fat ice cream with strawberries (in sugar of course!).

No we don't have a stove, and just in case you think we live in a swanky love nest or in a trendy apartment let me clear that up for you.

The two lane street in front of our apartment in this low income, working class neighborhood, has been discovered to be the shortest distance between two very popular points of The Big City. And since the only thing that separates our building from the street is a sidewalk we get to hear every vehicle (sirens, cars with stereo bass systems that were never intended for the human ear...) that passes by.

But that's a piece of cake because you see we don't have a back yard, we have railroad tracks. There is a law that trains have to blow their whistle when approaching any opening to traffic and we're lucky enough to have a factory right beside us that has such an opening. We've learned to stop mid sentence when talking and then just take up conversation again once the SCREAMING whistle has stopped. At least we can hear over the shaking and vibrating of the train itself and believe it or not we sleep right through the night. The first time our Beast came to stay with Vet Tech Girl who lives below us and a train came through, that poor cat nearly turned inside out and tried to hide under the couch but she was too fat to fit.

Our laundry room is in the basement of our duplex and even though it's a short walk to the back of the building to access it, we lock our apartment door when we go there.

Vet Tech Girl, who lives below us, gets to hear the street level noises each night which usually involves loud drunks, fighting lovers, or loud fighting lovers who are drunk.

And because I need a cement base in order to pound grommets into my bags and purses, unfortunately the sidewalk in front of our apartment is my only choice. So while I squat, all bent over, on the front steps everyone who drives by can watch me. Sometimes people honk their horns but since I don't know anyone here in The Big City I don't look up. One day after an unusual amount of honking it wasn't until I was done hammering that I realized my low cut tee-shirt was gaping open and the whole world had been treated to the sight of my Frederick's of Hollywood Bra (cheap on line purchase). The honking was probably protesting the fact that I will obviously never be a Frederick's of Hollywood model.

Another time one of our neighbors angrily paced on his sidewalk and multi tasked by puffing wildly on his cigarette and screaming into his cell phone at the same time, so while I pounded on my grommets I got to hear this, "What the fut! What you talkin' about, ho?! What the fut! Who tell you that!? Man, you is full of shit! I astin you, who tell you that!?"

I wanted to tell him not to look at me, I didn't tell anyone anything, and besides that I have a hammer in one hand and a pit-bull in the apartment. But I just kept pounding my grommets.

So that's my life in the Big City. No stove, no more unlocked doors, and I have to drive to a trail for my daily run.


But I don't have to mow a yard and with our free improvisational street shows, and the added bonus of cheap crab legs, this is even better than dinner theater! 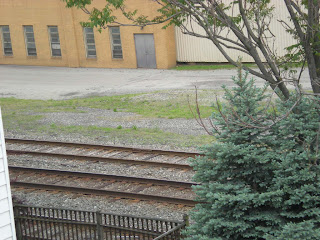 LMAO!!! Oh my god! That sounds very colourful! Hey, as long as there are no drive by shootings, colourful is GREAT, right? It beats going out the door and seeing no one and no body which is what happens here. I miss the big smoke. I NEVER watched TV back then.

When my sisters lived in Boston, the red line stormed right by their windows. I know what you are saying there. :-)

I'm sure your neighbors are all blogging about the crazy half-dressed lady who pounds on the sidewalk with a hammer all day.

We do the "all conversation stop" for airplanes. The Valley is like one big echo chamber, and often they go by so loudly that you can't hear anything else.

I guess I never thought about what I look like to my neighbors! I've always felt so invisible. But I hope they're afraid of me, that would be fun. And having grown up with the sound of night peepers and morning birds, these man made noises take a bit of getting used to.