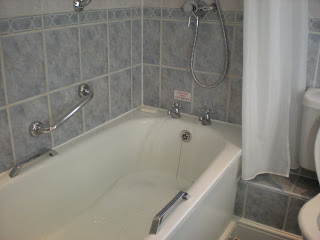 Yesterday (Wednesday) we were up at 5 AM in order to catch a 6 AM taxi to the airport. We left Italy, landed in London, and arrived in Oxford around 11:30 AM.

The men went straight out on business calls (I don't know how they do it!) and after lunch which consisted of a huge sandwich and a pint of beer, this is where I chose to spend some quality time. 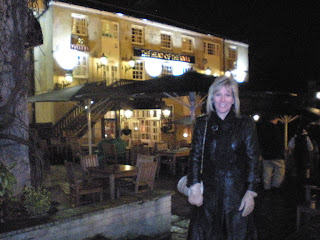 We were supposed to go out to eat at around 5:00 PM but of course we got the inevitable call from the men; traffic was horrible and they probably wouldn't get back until around 7:00, which in reality became 7:30. Luckily our room, unlike the ones in Paris and Italy, had a coffee pot and I don't know when I've drank so much coffee and tea in my life.

This is the Pub we went to first.

Of course it wasn't until our taxi's had left that we found out they weren't serving food that night! Adam, our English connection for the night was very embarrassed and after gulping down our beer and wine (the corked bottle with our remaining wine was shoved into one of Hans' coat pockets!) we zipped of to a different pub. 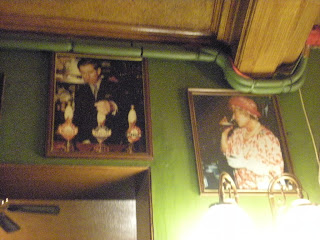 Up on the wall at the second pub are pictures of Prince Charles and the Queen. Apparently they dined and/or drank here once. It's a little blurry but you can see Charles 'pulling' a pint at the bar and the Queen (minus a glove on her drinking hand) is ever so properly sipping her beer. 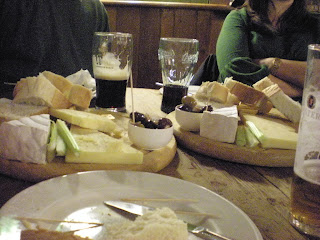 Hans had mentioned that the cheddar cheese in England is wonderful and he asked Adam if that's what we should order as an appetizer. Adam said that we could, but that in England cheese is served as dessert and it might cause confusion if we ordered it first.

So after inhaling my steak pie and fries, out came this; two platters of cheddar (white, not yellow like in the states), big wedges of brie, thick slices of bread, and butter!

Adam was footing the bill for the evening and we were horrified! In the states this would have been pretty expensive and we knew we couldn't eat one tenth of it (and don't think I didn't try!). Adam just laughed and said it was only going to cost about 3 pounds and not to worry. We still couldn't stand the waste so we asked if we could take with us. The servers were highly amused and brought us a piece of tin foil, so sitting in our mini fridge is a lot of cheese and bread.

It will not go to waste! 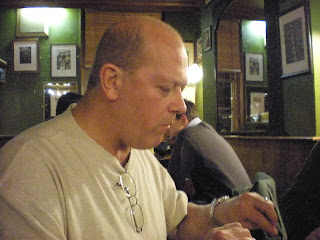 Hans got the steak pie too, and here he is working on it. 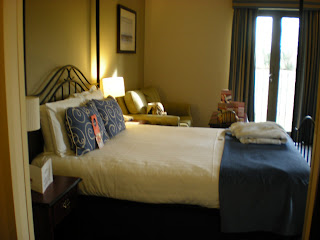 So far this has been the prettiest and most comfortable room we've stayed at during these 2 weeks. 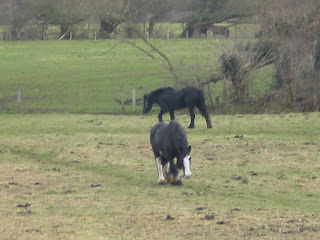 This is the view from our room.

And here's where I am as I write this. It's a little sitting room on our floor. I'm waiting for our room to be cleaned and I thought it would be nice to sit here. It's raining and very cold outside so I don't think we'll do a lot of sight seeing this afternoon. Maybe since the men are to arrive back around 4:00 or so we will go out and see some sights with them. And since they are right here in Oxford I don't think they can use traffic as an excuse to be late this time! 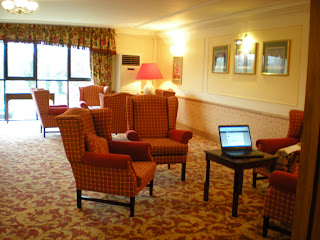 Mmmm, huge wedges of cheese sounds like my kind of meal! What a lovely view out your window.

Oh, I'm so jealous. I so want to go back to England. I lived there for six years and adored every minute of it. Love that bathroom!