Bonnie and Clyde (or Hans and Laura) strike again. 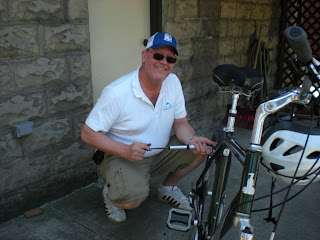 First of all don't let this 'I'm Pumping Air in the Tires Because I'm a Boy Scout' look fool you because Hans is a rebel at heart. It's really not his fault, it's in his genes.

Like the time Hans Sr. and family were returning to their Miami Beach home (Hans was in high school) from an overnight sail. The Coast Guard was requesting that everyone entering American waters please anchor and wait until the following morning so that the Coast Guard could inspect boats for drugs.

"I have nothing to hide! We aren't carrying drugs! This is a complete violation of our rights!" raged Hans Sr., so they blew past the Coast Guard and headed home. The first Coast Guard helicopter landed in their yard just as the first bag from their boat hit the dock.

The fine for this deliberate flouting of authority should have been in the tens of thousands of dollars (just by putting a bag on the dock was a $5,000 fine and remember this was over 35 years ago!) but somehow Hans Sr. managed to get the fine into an affordable range.

You would think this would have sent a message to the younger Hans.

That's why I'm quite sure if I continue to hang around with this man I'm going to end up with a police record some day.

Today we decided to take advantage of the 80 degree, sunshiny weather and go for a bike ride. This Big City has bike trails to die for but unfortunately there is no way to get to one from the apartment without hauling our bikes with the SUV.

No problem for Hans. He decides we'll just jump the fence at the Railroad track (The one with the huge No Trespassing sign that threatens jail time, fines, and public humiliation).

I have no idea how I became the first one to use the huge lock and chain on the gate as leverage to hoist myself over, or how I ended up carefully handing the bikes down as Hans heaved them over after me.

I only hope my mother never finds out half of the stuff I get into when I'm with Hans. 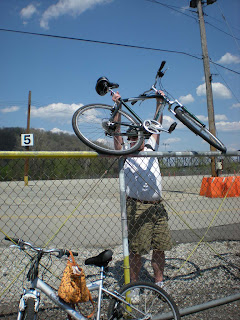 Here's Hans lifting his (huge and heavy) bike over the fence.

He reminded me that taking pictures was just making things easier for the authorities should we get caught. 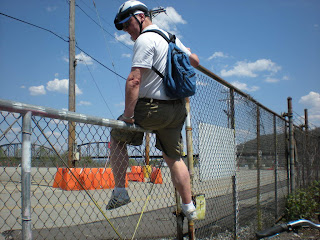 And now the Big Guy attempts to cross over without hurting himself.

But get this. On our way back Hans decided that since we were on the wrong side of the tracks already we should just continue on for a bit and see where we would end up. We found a dusty lane that goes to a factory that's right beside our apartment.

I kid you not. Hans has lived here for over 4 years and we had no idea that all we had to do was go behind the factory and we'd be right where we want to be.

I think Hans was a little sad though. No more Mission Impossible for us.

Jumping fences is so much more fun!


Now on to some sewing. The other day I was in line behind a woman who had a leather backpack/purse. I've seen them around and while they're nice, they're kind of boring. So I decided to make one of my own. Luckily she had her back to me or she would have been alarmed at the intensity of my stare as I really looked it over. 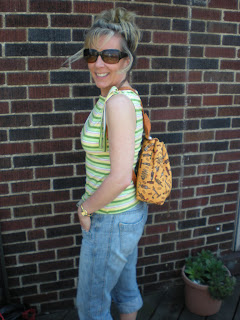 Here's my version and even though I used a leftover piece of fabric and really didn't think I'd like it, I loved it.


I used it today for our bike ride and it worked out perfectly.

I made Hans take these pictures of me using it.

Here it is as a back pack. 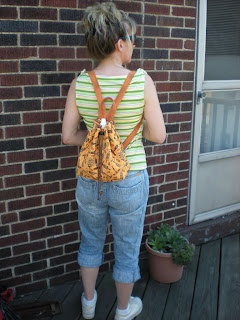 Another view. The white thing at the top of the bag is my water bottle (and yes it was water!!). 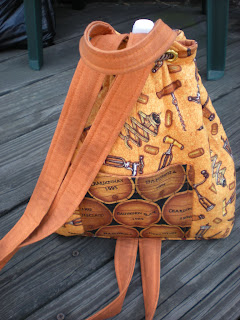 This is the back and that's a patch pocket with a velcro closure. The next time I'll just use the same fabric. And while I'm not a huge fan of velcro, this just made sense. This is the part that goes against your back and it should be smooth. I carried my license (in case the police want to know who the hell I am!) and insurance card (remember who I'm riding with) in it.

Now, see the smaller looped handle? You can hang it up by this loop, or carry it on your wrist, or...


...if you pull the longer straps through it, it makes the bag easier to carry as a sling bag... 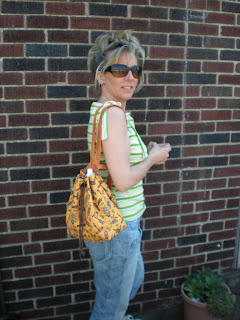 ...like in this picture. Here I'm just carrying it on one shoulder.


I've seen some bags that use a stategically placed zipper between the straps that allow you to zip them together for a sling bag or separate them for a back pack. However I don't want a zipper against my shoulder (imagine having a sunburn) or the thought of a zipper snagging a top. 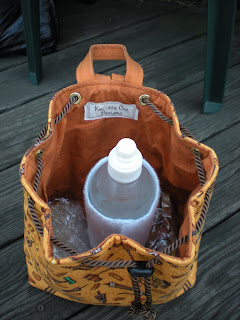 I took a water bottle (wrapped in Thin-sulate) and a couple of sandwiches with me. I get the shakes if I don't eat every couple of hours and even though I don't like to drink water I guzzle it on our bike rides. 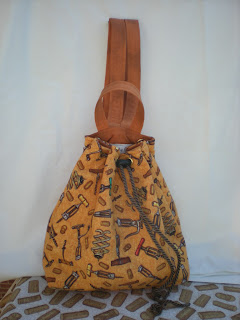 Here's a view of the front.


I showed it to her after our bike ride but before I took her ill behaved dog for a walk.

"You know that's already been done," she said. "Like way back in the 90's. No one's going to want that." She remarked.


"But it's so practical and yet pretty" I pleaded. "And it's very well made and I have a couple of other design ideas for it, and I'm going to use different prints!" I found myself scrambling for her approval.
She just shrugged.

I don't mind honesty but it seemed to me like she went out of her way to be snotty and I ended up feeling like a deflated balloon. 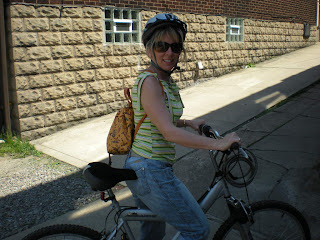 This chick had no idea what she signed up for when she met Hans!
Posted by laura at 7:40 PM

You look great on your bike. What an adventure. I should make me a little backpack like that. :)

The backpack looks great for a bike ride--cute but practical.