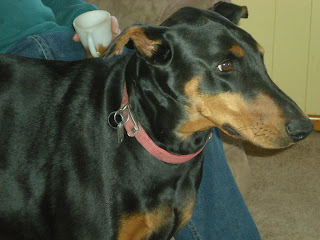 A Cowardly Doberman, and a Pathetic Pit Bull. These are just a few of the characters with whom I spent my Easter Sunday.
Also included were Hans, all of my kids, my parents, and some of my parent's friends.
The Easter Beagle was very generous and brought a basket for my parent's cowardly Doberman.
She's a love bug! 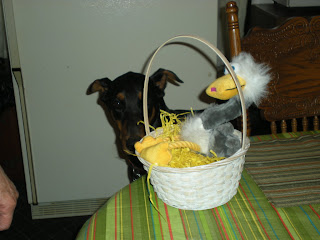 This year's offering was an ostrich and it squeaks in a delightful way when Kissie Pooh chews it. This dog has her own toy box and it's filled with stuffed toys and bones. 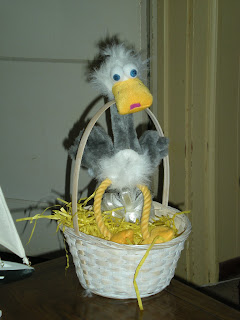 This is just a better picture of the poor unsuspecting ostrich that will soon be chewed to pieces.
Kissie Pooh also received a squeaky parrot (from my parent's friends) and a stuffed goose (I loved the way it honked and I spent far too much time squeezing it). 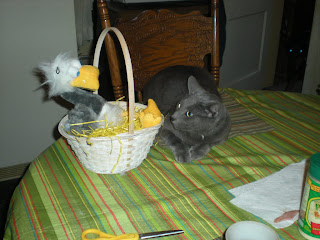 Smokey the Cat, who ,thanks to a chronic urinary blockage, recently had surgery thus changing him from boy to girl, is now a Trans-Gender cat (at the tune of something over a thousand dollars!!), checks out the Easter Beagle's gift.

And yes, he/she's on the kitchen table (but since my parents just spent big bucks on said cat, are you really surprised?). 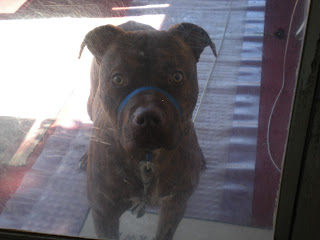 And this poor little guy was relegated to the porch. My little grand dog Duncan has a bit of a reputation.

In other words, he has no manners.

I took this picture (without the flash) through the storm door and I felt just awful.

He sat outside and whined for about 2 hours. 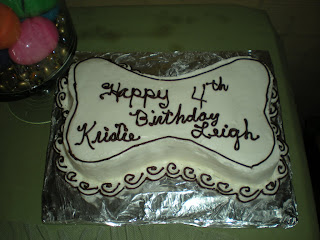 In addition to celebrating my son's 26th birthday it was also Kissie Pooh the dobermans' 4th birthday.
Both received cakes made by my mother.
My son's cake was not in the shape of a bone!

Ever since I can remember our pets have received and opened their own presents and Kissie Pooh is no exception.

Here is a short video of Kissie Pooh opening up just one of her gifts.

If I've said it once I've said it a thousand times; in my next life I want to come back as one of my family's pets!!!!

My goodness, Laura - you've been sewing up a storm. I love the grommet detail in your bags.