A Penguin Purse and a Bone to Pick

I guess I'll start first with The Bone to Pick.

I have a lot of stuff I'm supposed to accomplish this week and I'm a little behind and while I really hate to lay blame, I'm going to anyway.

Now just so you know, it's a Young Adult Book aimed primarily at a teenage audience but if a book is good I don't care who the intended audience is.

Well to make a long story short (something I'm not good at), Hans had a business dinner last night and I was invited (I was absolutely giddy as I don't talk to anyone but the cat all day long!), but he ended up being about 45 minutes late and I happened to have Katie's book with me.

That's all it took.

When we got home I should have started in on my sewing but I continued reading Katie's book instead.

Please understand that if I didn't like it I wouldn't be mentioning it.

I really do, and I've been a book-a-holic since about the third grade.

Take a look at the reviews and if you know a teenager who likes to read, this might be for her.

So thanks a lot Katie, because even though I was in the middle of an Olivia Goldsmith book (author of The First Wives Club), your 'Alexis' has taken over! 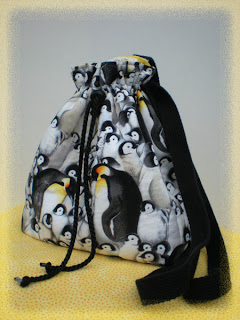 In my last post I showed you pictures of my latest bag which is a backpack/sling bag.
I liked it so much that I went out and bought this penguin fabric (I also got some soccer fabric but it's still uncut).
Anyway, my first bag may have gone together slicker than snot but this one didn't. I made so many mistakes! I ripped out seams, I resewed the same seams, and then realized the damned things needed to be ripped out again!!
I also decided to sew a casing for the draw string as opposed to eyelets (which can run into a bit of an expense), and I ran into trouble with that too.
But in the end I did get it finished and I'm happy with it.
I had it with me last night and a friend expressed interest in ordering a couple of them and I couldn't get to my Vet Tech Girl fast enough to tell her. If you recall, she told me NO ONE would want one! 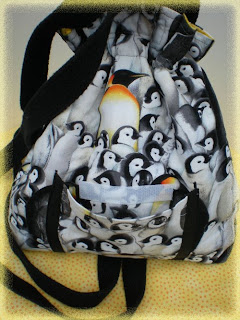 The back of the bag with its Velcro pocket. 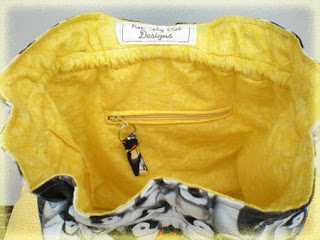 I added a zippered pocket insert to this bag.


So tomorrow I'll finish up 4 more bags for the winery down in Annapolis ( on the eastern shore) as we're leaving for the boat on Saturday.

And I'll try to limit my reading to tonight only!

'slicker than snot'
LOVE it! lol

And as a fellow book-a-holic, I can totally understand not being able to tear yourself away from a good book for any reason!

I think using terms like 'slicker than snot' etc...is what probably keeps me out of the society pages of our Big City paper!