I'm supposed to be sewing so why am I blogging?

Because I need to let you in on some great news and a contest.
Katie Alender (a fellow blogger and sewist) has just had her first book published by get this, Disney-Hyperion!
And it's a hard back book, not a paper back.
I think that's pretty big news.
It's called Bad Girls Don't Die and even though it's directed toward teens I'm buying it anyway as I still don't feel very grown up most of the time and I can remember my teen years like they were yesterday.
The rules for the contest are here. Even if you don't want to enter you should take a look at her site anyway. She has a book trailer on her side bar that her husband helped put together and it's really great!
So take a look at Katie's blog and if you have time, check out her dog Winston. He's a cutie and just possibly more spoiled than my parent's dog.
Yesterday I spent the afternoon working on two more tote bags (with a wine theme) to take with us to the winery in Annapolis where the manager has offered to consign them.
I should have checked with my personal Design Critic named Hans (He's the only man I know who rates Hockey teams according to their uniforms. I kid you not!).
He took one look at the almost finished bags and said,"No."
And I felt my blood turn to ice.
Hans said he understood why I did what I did but in his opinion they're 'not right'.
I said (hopefully) that maybe some stupid woman with absolutely no taste (like me) might like it.
He said, "Maybe."
So, I desperately scrambled around and grabbed up cording and handles and fabric (I felt like Scarlet O'Hara when she ripped the draperies from the window to make her dress) and presented them to the King (I mean Hans) for his approval.
He finally relented and said that the bamboo handles I've been hanging onto would probably work.
So today I'll finish these damned totes but you can bet I will not start another project until I consult with his highness! 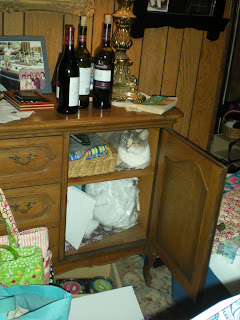 I've taken over a lot of spaces in the apartment for my sewing supplies and that includes Hans' mother's buffet (I seriously doubt that she ever envisioned it being used this way).
I had wandered over and reached inside when I encountered a fuzzy mass that made me jump back in terror.
Yes, it's my Chlorox Kitty and I don't know why she felt compelled to get in there. I would have loved to see her do it though as it's a tight fit and it had to be a comical sight.
BTW, those wine bottles on the buffet (again Hans' mother would probably be horrified!) are not how I get through my day (although don't think it's not tempting), are what I use to test the look and strength of my wine bags.
Really. 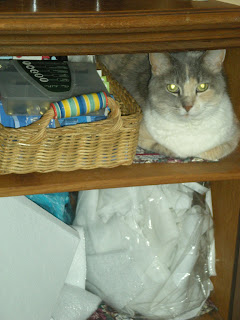 Just a close up of my little Knotty Cat.
I read somewhere that with photo-shop you can fix the glare in animal's eyes.
I think I need to concentrate on sewing first.
And I'll post pictures of those bags when they're done.
But don't be surprised if they're wrapped around Hans' head!

Your cat cracks me up. My orange cat does the same thing. Love the idea of using a buffet for sewing storage. I may use that same idea!

You realize that with every post about these adorable bags, you are seriously tempting me to unload a bunch of fabric on you. But Hans would definitely not approve of my taste in fabric.

Thank you so much for blogging about Bad Girls!

That cat sure is funny! I'll have a look at your link ... thanks!

Are you taking them to the wine store in downtown Annapolis? The one at the bottom of the main street where all the shopping is? I love that store!
And I do totally understand using Hans as a photo prop for the handbags. I'm still thinking using my first quilt as a shroud.

I caught Chorox in the buffet yet once again today (I think she's a camera whore!) so I took even more pictures.

Katie, getting fabric past the Great Wall of Hans could be difficult I'm sure, but then if you got yours past Mary Lou...?

BeeBee, actually we are on the 'Eastern Shore' although at one time Hans had a boat right in Annapolis. But I do know which store you're talking about. And before we bought our boat we would stay at Chick and Ruth's (say it fast and it sounds like Chicken Ruth's!!) Bed & Breakfast. I love that place.