The beginning, the middle, and when will it ever end? 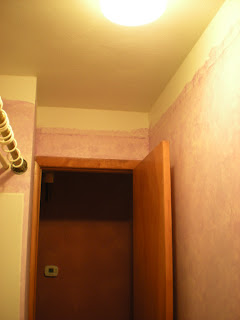 I actually almost cried last night.
I was that frustrated.
First of all, please excuse the different hues of lavender in these pictures. The first two were taken during the day without a flash and the last one was done at night with a flash.
Once again, here is the before picture. I needed to paint the upper part of the wall and cover the obvious line that was still going to show. 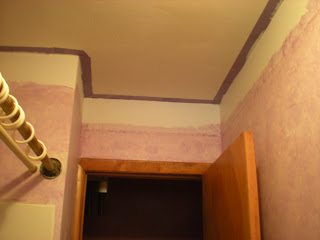 The deep purple strip at the top of the wall is painter's tape so that I could protect the ceiling from the primer that I had to apply to the upper wall.
While this dried I took a quick run to the Salvation Army, and upon opening the back of the SUV, a table lamp that I've had for something like 20 years, fell out and smashed all over the pavement. The employee who came out to help me was so nice and immediately offered to throw it away for me. I have to tell you right now that every time I've shown up at The Salvation Army (and it's a lot of times believe me!) with a vehicle full of junk I've been greeted with nothing but kindness. Even in the most bitter weather the employees have brushed off my apologies for dragging them out into the cold to help me unload and I think that's so nice! 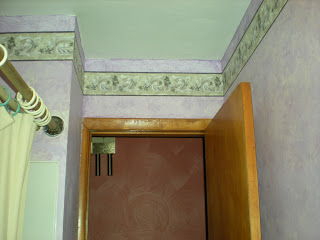 Here is the finished product. Not an exact match but it's going to have to do! Like an idiot I decided to start off with a 12 foot stretch of border. I did remember to 'book' the border after soaking it in water. Booking is a procedure where; after getting the paper wet, you fold the pre-pasted sides together for a few minutes before placing it on the wall. This allows the glue to expand and adhere.
Or so they say.
I then lined up 5 chairs along the wall and starting at one end I placed the paper on the wall and tried to walk my way down the room on the chairs. I was almost to the end when the paper at the beginning started to pull away and no amount of my leaping about stopped it. I ended up wearing a 12 foot wallpaper border boa and by the time I was able to sort things out the paper was starting to dry.
That's when I almost cried.
And then I got mad.
So in true Scarlett O'Hara fashion I vowed that as God was my witness I would not allow this wallpaper to defeat me!
Thank God I had not thrown out the sizing mixture that I made earlier. I had about a gallon of the junk and it says in the instructions that you can use it as wallpaper adhesive.
And by God that's what I did.
I cut the 12 foot strip down into more easily handled pieces, slapped the gelled gunk onto them and this time they stuck! I continued to cut and paste my way around the room until I was finally done. Of course I also had to make sure that each strip was the appropriate distance down from the ceiling because I didn't want to come around full circle and find that my paper was either way higher or lower than the first piece that was placed.
I ended up with as much paste on me as I did on the paper and I'm surprised I didn't wind up plastered against the wall ala Lucy and Ethel after their wallpapering fiasco.
This whole house selling thing has turned out to be quite a project and I don't want to do it again any time soon.
Even after all the work I've paid to have done, and that I've done myself, this place is less than perfect and it's really starting to bother me.
I just want it to be over.
NOW!
Posted by laura at 9:00 AM

Oh, dear, I so know your pain. Doing all that by yourself. That's my song and I'm tired of singing it. But you were inventive and tenacious and the end result looks really good. I would never have thought of putting a row of chairs along the wall to step across. How clever of you! I don't know about you, but anymore, I'd much rather be sewing or just about anything than home improvement - even if it is to sell the home and be with a cutie you love. I suppose if I didn't have to do it all alone, that would be better.