...is exactly what I went through while putting together my latest bag.
I have to tell you, there is something to be said about this purse/bag making business.
#1: OMG!

#2 : What a nightmare.
First of all, I arrived here in the Big City on Thursday afternoon, carried an SUV full of my 'junk' up to Han's second floor apartment, and then spent Friday utilizing my Rainbow Sweeper by vacuuming every baseboard, nook, and cranny in the apartment that I could get my hands on.
For Hans' sake I will say no more.
As a reward to myself I decided to make an innovative (meaning self drafted, and yes I should know better!) new wine bag for Saturday evening as we'd been invited to dinner by a couple celebrating their third (month) anniversary.
Isn't that cute?
Ok, so Hans and I celebrate every six months together (Mostly because I can't believe he puts up with me and at this stage of our lives every minute counts!).
But anyway, this purse making thing was going to be so easy.
A simple bag, wide enough to hold two bottles of wine and by gosh I'd toss in the hex frame closure that I bought on line last year. Give me a couple of hours and I was going to set the world on fire with my little endeavor.
I'm not kidding when I say that I made at least three templates before I came up with anything even close to what I wanted (and I wasn't even drinking).
I started right after breakfast and 9 sweaty, infuriating hours later, I finished ten minutes after we should have left for dinner.
What I ended up with will work.
Not quite what I had in mind, but yes, it will work.
Actually, when I was almost finished with this bag I realized that the lining side was more interesting, and that some of the construction techniques, instead of being hidden, could lend some fun to this venture.
Maybe next time (Yeah right! Let me tell you, it will be a cold day...).
And let's not forget that Thomas Edison had over 10,000 (yes, 10,000!!!!) failures in his attempt to invent the light bulb, and don't I have a nerve comparing my amateurish endeavors in the same league as Thomas Edison?
Yes, I do.
I know that.
But if not for people like him, who would ever continue to strive. 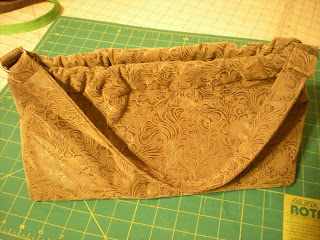 This is the finished version. I used left over 'fake' leather that I used for my sister's birthday present last year. 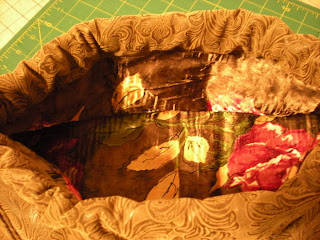 This is the open version using the 12 inch hex frame that I bought on line last year. 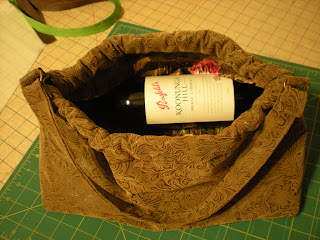 Here is what it looks like with a wine bottle inside. It will hold two bottles side by side.


An important feature for Hans and me. 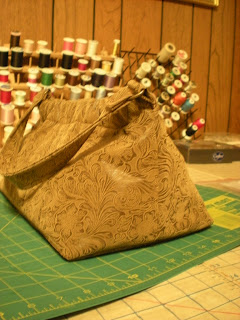 A side view of my masterpiece. 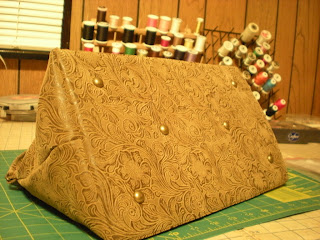 And the bottom with the addition of 6 purse feet.


We only ended up being a few minutes late for our get together, but I was in such a hurry that while I was simultaneously trying to fix my makeup and hair (I took my grand-dog Duncan for an hour walk earlier in the day and it involved a lot of wind, ice, and me falling on my butt, but that's a whole other story) I totally forgot to wear any of my jewelry and we celebrated the other couple's anniversary sans my engagement ring.

But luckily for the populace of The Big City I did remember to get dressed!
Posted by laura at 9:20 PM

It never fails that when I start a project with a deadline, it always goes wacky!

9 hours! That's dedication! In the end it came out very cute and I love the purse feet.