To wine or not to whine! 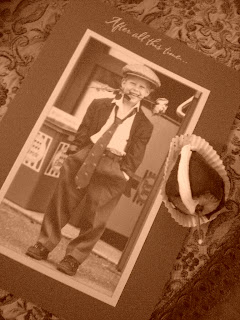 As I mentioned in an earlier post, Hans and I were invited out for Valentine's Day.

Dinner was held at a friend's house and I think there were seven couples in attendance. The men were in charge and in addition to preparing the meal, they served the ladies, cleared dishes, and cleaned up.

It was just too much fun, all the guests were so nice, and believe it or not, the whole idea was a man's!

I kid you not.

I had my camera with me but I just never got around to taking pictures and since I don't like to post photos of people without their permission you wouldn't see them here anyway. But I did bring home a chocolate covered strawberry, so I took a picture of it next to the card that Hans got for me.

I have to tell you, those strawberries were fabulous.

Giant Eagle frosting in a can.

Melt the chocolate chips, I don't have a double boiler so I put my chips in a Pyrex dish, in a pan of simmering water on the stove, and heat until melted.

Using a toothpick, dip your strawberries in the chocolate and place on little fluted paper cups.

Pipe a stripe of frosting onto the cooled and hardened chocolate. You can create a baker's piping tool out of waxed paper, formed into a cone with the pointy end cut off. Put your frosting inside and squeeze it out the other end.

They must be simple as they were made by a very busy couple who have FIVE children aged 10 and under.

Believe it or not there was another couple there who have five kids.

And in addtion to being sane, they were loads of fun.

Hans was very helpful and poured gravy all over my pork, beef, and potatoes (I love gravy) and after I took a bite and proclaimed it to be absolutely fabulous, we found out it wasn't gravy. It was juice from the stuffed apples.

I think I've hit on a whole new taste treat.

Anyway, throughout the evening, we ladies never had to leave our seats and Hans said that out in the kitchen the men were very busy and while one man really took over and had everything running very efficiently, the other men would report on what was going on in the dining room. One husband skidded back into the kitchen in a panic when our innocent topic of circumcision was overheard and none of the men would venture back among us until a tamer subject was being discussed.

When we got home Hans was very eager to hear my take on his participation during the evening.

"Did you notice me coffeeing everyone?" He eagerly asked.

I had to smile because I know that before Hans met me he had never heard nor concerned himself with the term coffeeing. As a waitress I've lamented many a time to him about how I have to keep after the younger servers to 'coffee' their tables.

"I coffeed quite a bit you know." He added.

I told him that I did indeed notice and that he did a wonderful job.

And I had to bite my lip because I've never heard the term 'wining' when it comes to pouring wine, but I couldn't bring myself to burst his bubble.

"I did notice!" I exclaimed. "And you were the biggest winer there tonight!"

I was rewarded by a very happy, Hans smile!

He's so stinking cute and I'm going to miss the heck out of him.

He left for Europe today and he's going to be gone for two long weeks.

It sounds like you had a wonderful Valentine's day. I can see why you will miss your Hans. He sounds like a wonderful guy. I am finally back to blogging. Everything is unpacked and I can take it easy now.