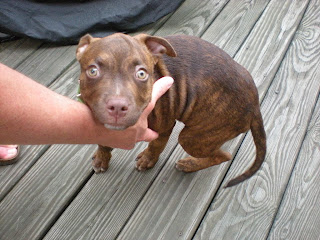 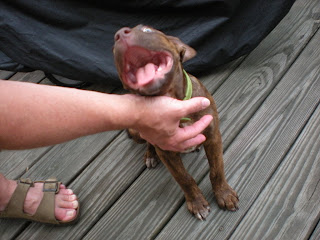 Well, he'd be called Alien Dog if 'The Examiner' (Bat Boy lives in the White House, Bat Boy spotted at Disney World...) was to get a hold of these pictures.

These are just a few, of the approximately 1,000 pictures, I've taken of the Vet Tech Girl's new puppy, Duncan.

Oh my, I can't even imagine how nauseating I will be if I ever become a real grandmother.

Actually, I would be completely happy if my kids opted for pets as opposed to kids. 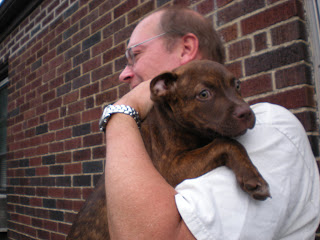 Here is Grandpa Hans with Duncan. 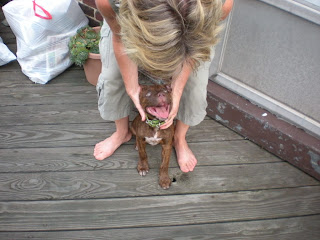 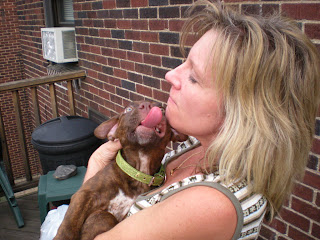 Lots and lots of Duncan kisses. 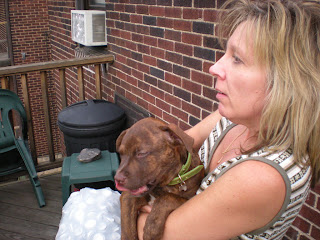 Finally, Duncan and Grandma Laura are both worn out.

Hans and I went for a huge bike ride today, and when we got home we invited Vet Tech Girl up for a visit, with the stipulation that Duncan be included.

He was wound tighter than an 8 day clock!

Finally, after 'sitting, speaking, shaking hands and having little piddle accidents, Duncan started to calm down. Vet Tech Girl works with him constantly to ensure that he has a proper upbringing. Every time he eats, she takes his food bowl away from him, gives it back, and then takes it away again. This is to make sure that he doesn't become possessive and therefor aggressive with his food, as it stands; he doesn't react at all, he just looks around as though nothing has happened. Hans dropped a carton of eggs on the floor by mistake, so they were put into a bowl (eggshells and all) and given to Duncan, who proceeded to chew and scatter egg shells all over Hans' deck. We grilled steaks and Duncan got the left overs.

His diet consists of portions of raw meat, raw bones, and doggy supplements.

I kid you not!!! Vet Tech Girl has done all the research, I promise.

She takes him on 'play dates' to a friend's home, who has a female pit bull, and even though Duncan's the one with the heart murmur, he wears that poor dog out.

At one point, in his extreme excitement, he whipped around and nipped me with his sharp puppy teeth. Vet Tech Girl girl immediately went into mommy mode and astonished me by saying in a rapid fire way, "Don't let him do that! Every time he does that you grab him by his lip," and roughly demonstrating on herself, she harshly pinched her own lip, "and yank it down!"

Dear God, I hope that girl never has real children of her own as someone would surely turn her into Family Services!

I love our 10 year old female pit bull, Phoenix. She is a sweetheart. I love the way they smile. Ours will lick your face off too.I see Duncan smile and licks too. They are such babies.

Joan, I'm a sucker for all animals! They are so affectionate and I can't believe anyone could ever be cruel to one!!!