The end of a wild and whacky weekend

We managed, minus one engine, to limp back into our slip on Sunday and the Engine Doctor came to visit on Monday. Miss Kitty's diarrhea came as a result of chronic constipation as she had a lot of carbon built up in her lines (apparently she suffers from PMS too!) and everything blew! So she got her lines cleaned out and her oil changed in both engines. The good Doctor probed, pounded, and praised her, and had her purring, in no time flat.

She was supposed to have her oil changed on the Friday of Labor Day weekend but our mechanic had to cancel. Miss Kitty didn't like being stood up, had a fit, and sulked her way through the weekend.

We're finding out that Miss Kitty does not like to be taken for granted.

While we were away, I received too many emails (consisting of 'I will never babysit for you again!!') from Vet Tech Girl who was watching my two girls, Chlorox and The Beast. Chlorox did indeed spend the whole time under the bed and The Beast hissed at everything, including Vet Tech Girl, all weekend. Also neither cat ate or drank anything (Chlorox; maybe, The Beast; I hardly think so) resulting in a lecture about failing kitty livers and other maladies that can beset a cat that fails to eat etc...

The straw that broke the camel's back however, was when Vet Tech Girl arrived home from work at 2 AM (she works odd 12 hour shifts), threw open the bedroom door where she had locked the kitties for the night, only to discover that The Beast was missing.

And even the Beast isn't smart or agile enough to use a door knob.

Poor Vet Tech Girl raced around the apartment and as a last resort, opened up the kitchen door to her deck, only to find The Beast staring impassively back at her.

It took some figuring but here's what The Beast did.

She managed to squeeze between the air conditioner and the window and as she's something over 20 pounds I have no idea how that was possible.

BUT, the deck isn't under the window. The only thing under the window is an aluminum awning that covers the door that's directly below, and even then it's about a 3 foot drop. She had to have landed on the awning and then slid off to the paved driveway, meaning she fell a whole story. And then instead of heading out into a busy street or worse, she found the very narrow circular steps up to the apartment where she patiently waited for Vet Tech Girl to come home. 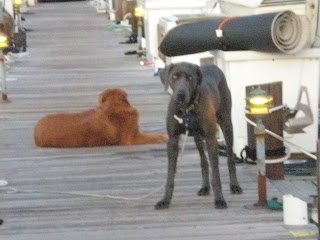 You see a lot of this at the docks. People love to boat with their pets. I swear this is the same group of ducks I fed earlier this summer, only now they're all grown up. 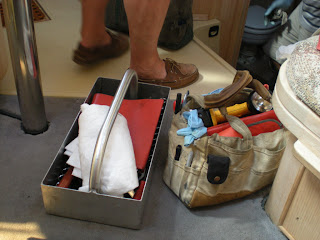 Here's the good Doctor's tool kit. Miss Kitty love getting the blue glove treatment. It made her feel special. 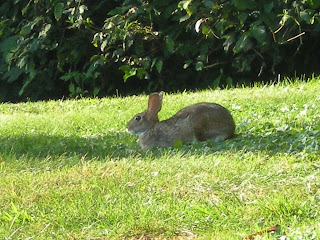 This is what was sitting in my front yard when I got home.
Posted by laura at 7:30 AM

Wow, that cat is nuts!! Amazing how she figured that out. Plus isn't it odd how they know where home is, even if it's temporary?

Nuts is putting it mildly! She has escaped from my house too many times to count, and then there she'll be; sitting on my front porch just waiting to be let in!